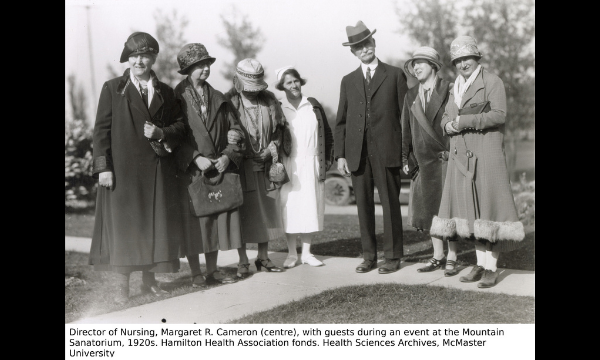 In 1911, when I came to the Mountain Sanitarium, there were only 54 patients.

I went on duty in 1912. At this time there were no night nurses. When it was necessary to get up during the night to care for hemorrhaging patients, we stepped out of bed attired in nightgown and night cap, pulled on a kimono and slippers and with nightie waving in the breeze and lantern in hand, struck out across the grounds to the shack where the sick patient was located. The residence then, by the way, was in the Grafton Building. It wasn’t an uncommon thing for a nurse to lose her slipper “in transit” in which case she carried on slipperless. Often it was necessary to get up two or three times during the night and still report for duty bright and early the following morning. In the evening, we frequently remained on duty till 8 or 9, particularly during and following the years of the First Great War.

We made beds with two coats on in addition to sweaters, mitts and toboggans. Felt boots were also worn on duty.

The windows in the shacks where the patients were housed, were on ropes and resembled barn doors more than anything else. It wasn’t unusual at all for Dr. Holbrook to drop in while a blizzard was in progress and pull these windows shut to keep out the snow which otherwise would cover the
beds. When this was done, the rooms were necessarily quite airless. On these visits, and also for regular rounds, Dr. Holbrook wore a fur cap, 1ong overcoat and hip boots to say nothing of the heavy mitts and scarf.

At first soap stones were used in the beds of the patients to keep their feet warm. Later stone and tin pigs were used. Sometimes these pigs weighed as much as 25 pounds and often had to be re-filled two or three times
during the night.

Later on night nurses were engaged and the nurses’ residence was moved from the Grafton to the house presently occupied by Mr. Bartholomew. When this move took place a sleigh called regularly to take the nurses to the various shacks where they were on duty.

When we wanted a cup of tea when off duty, the water was heated in the furnace in the basement. The tea was likewise prepared down there and we sat in a happy group

around the furnace, supping our tea, chatting and incidentally toasting our shins.

The pumps froze often in winter. In this case, snow and ice was melted and heated on a stove for the patients’ bath in the morning. One particularly bad winter, a pond where the ducks had been swimming all summer and therefore full of feathers, was our water supply for bathing. The nurses a1so split the wood to keep the fires burning. The wood had to be split and the fires kept going also in the kitchen located then in the old Crerar Building.